To order a title from Amazon, click the cover of the title and type below to be re-directed to Amazon for purchase.  My titles are also available through other distributors such as Smashwords, Audible, and iTunes.

As with any murder, there is more than one victim.  Secrets rarely stay buried for long.

Samantha’s life is good, mostly. She loves her father deeply, but even daddy’s little girl finds the life of a military brat trying. Despite being the “new girl” too often, she soldiers on. Her mom could not. She lived for his life, but now wants one of her own. Helpless but to stand witness to their marriage crumble, Samantha’s life is once again packed up and shipped off, this time without her dad.

She now resides in the remote and seemingly desolate town of Columbus Cove. Saving her from the debilitating isolation was the cove’s latest resident, Channing Ashford. It is as if he had stepped off the cover of a romance novel and into the sleepy little town. He is charming and handsome and soon enough becomes Samantha’s sole focus. The now reformed drifter re-energizes her and they find sanctuary with each other.

When a shocking murder claims more than one victim, the couple is blindsided. They find themselves embroiled in an investigation that threatens their newly found happiness. All their reserves of sanctuary are spent as the secrets that lay buried beneath the unpaved roads of Columbus Cove come to light.

Between the Shades of Light and Dark – Kindle Instant Preview

Quiet and normal was what he was seeking.  It certainly was not what he found.  When the past comes calling…

Sheriff Martin Shuller was good at his job. He had a reputation of being a very thorough and very honest investigator. It had not surprised anyone when he was tapped to help with an investigation in a small neighboring town with a shocking high profile murder. Shuller, willing to help the quaint cove, readily accepted the challenge. Leaving his town in the safe hands of his deputy, Shuller traveled to Columbus Cove and worked the Steven Harrigan murder investigation. With the dramatic end to that case now behind him, Shuller returned to his seemingly normal and quiet town of Huntersville. He was glad to be back, despite only being gone for the brief time. A weight had lifted once he returned to his town, his routines, his life. He felt all the previous stress leave him as soon as he crossed back into his town’s outer limits.

Not long after returning home to his life and routine, Shuller is unexpectedly drawn into the case and discovers that things he thought he knew may not have been what they seemed to be. Shuller tries to come to grips with the revelations as they are discovered and those close to him worry for the embattled sheriff. As with most murders, there is more than just a single victim. Shuller had never thought that what had occurred in that house on Cedar Mill Lane would have uprooted what he thought he knew.

When it comes to family, it’s the ties that bind…

It surprised no one when Sarah and Jack married right out of high school; not because Sarah was pregnant at 19, but because they had been inseparable since sophomore year. Sarah gave birth to twins, Mark and Julie, and a year later, Jacob. They settled in upstate New York, Jack a business manager and Sarah a Real Estate agent. They had the ‘mom and apple pie’ life.

Their picturesque dream life turned into a nightmare when on a warm summer’s day at the local park, the penny dropped. What would forever be referred to as The Incident changed their family forever.

Four years later, they welcomed Christian into their home. The foster child turned adopted son never understood why Sarah was overprotective, but dutifully obeyed all her restrictive rules. When he started acting out, the couple were desperate to find out the cause of their son’s bizarre behavior. However, when Christian tells them about his friend they realize just why they are suffering at the hands of their son.

You are traveling into a dark and humorous place.

We start you off with light, soft stories, but be warned. You will find yourself falling into the ever darker, gorier, and more demonic stories with each passing page.

You may look at your couch, your washer, and even television and wonder if you should be laughing anymore.

Will your household turn on you?  Keep your Owner’s Manuals close by!

A virtually unknown author attempting to impress a large publishing house gets swept up into a massive murder investigation when his work seemingly leaps from the page making him the prime suspect.

Michael McAllister was a small-time independent writer.  With little to no true success, he strives to create the next breakout hit on his way to becoming a well-known fiction crime writer.  He just needed someone to take notice of his latest unique story idea.  A sudden opportunity thrusts him into the world he had only dreamed of, but he quickly learns that there is a difference between being famous and being infamous.

While a string of seemingly random open murder cases is not unusual for a large city’s homicide division, receiving an anonymously delivered draft manuscript detailing the murders, outlining more to come, is certainly not the norm.  Each written crime described maps to an open case, containing details not previously released to the press.  As it turns out, the unpublished work-in-progress is written by one Michael McAllister.

Detective Crawford, armed with what seems to be a killer’s perverse playbook, takes an interest of the previously unknown writer.  Has he discovered the writer’s morbid muse?

A dinner party to die for…

Eccentric and elderly socialite, Elizabeth Headstrom, hosts an annual lavishly themed party at her family’s sprawling estate. Always fascinated with anything supernatural, Elizabeth determined this year’s theme would center around a particular superstition. This year, she was to host a dinner party of just thirteen guests. She wanted to test the adage that if one broke the circle of thirteen at the table, then misery would befall all in attendance.

Ms. Headstrom intentionally invited only those who have been most notable in certain circles, some not exactly for the best reasons, to attend this year’s event. All the infamous guests accept her invite, unaware of the theme, as well as unaware of just how far the evening’s events would go.

If you’re a fan of Agatha Christie, you’ll be dying to find out how this book ends.

When left to its own devices, an author’s mind can conjure such wondrous things…

Given only a few words as a writing prompt, the authors of this anthology were issued a challenge – create a captivating, dark natured short story. The results are contained within the pages of this anthology. The Gathering is a series of short stories within the slightly darker themes of such genres as Paranormal, Crime, Suspense, Thriller, Mild Horror, etc. Independent Authors along with featured student authors from Timber Creek High School in Orlando, Fl, each crafted a story centered around a two-sentence idea, to which the imagination of the authors took hold of and ran with, creating this collection.

Want to join in the hunt for some missing co-workers? How about vegging in front of the television for a binge session, only to find out the TV may have other plans for your day. If those stories aren’t your cup of tea, then perhaps a spot of romance with a side of calamity? You could go a full 180 from there and try a paranormal trip down a long deserted highway, tag along with a bunch of kids as they explore a creepy old house, or worse yet, try escaping from a house you don’t remember being trapped within in the first place.

This collection of short stories offers a bit of variety in subjects sure to keep the reader on their toes.

@JonesTorchwood @Pancheers I got my collection yesterday. Thanks so much for raising money for cancer research. You… t.co/EUP0NQlMAu

@StephenKing Wow a shout out from @StephenKing. It must be a great book. Must say, getting an endorsement like that… t.co/t3ItLke5Ye

@Pancheers Hope you have a great birthday! Welcome to the 40s club.

My son decided to freak out the neighbors by putting Shazam in the front window upstairs. @ZacharyLevi 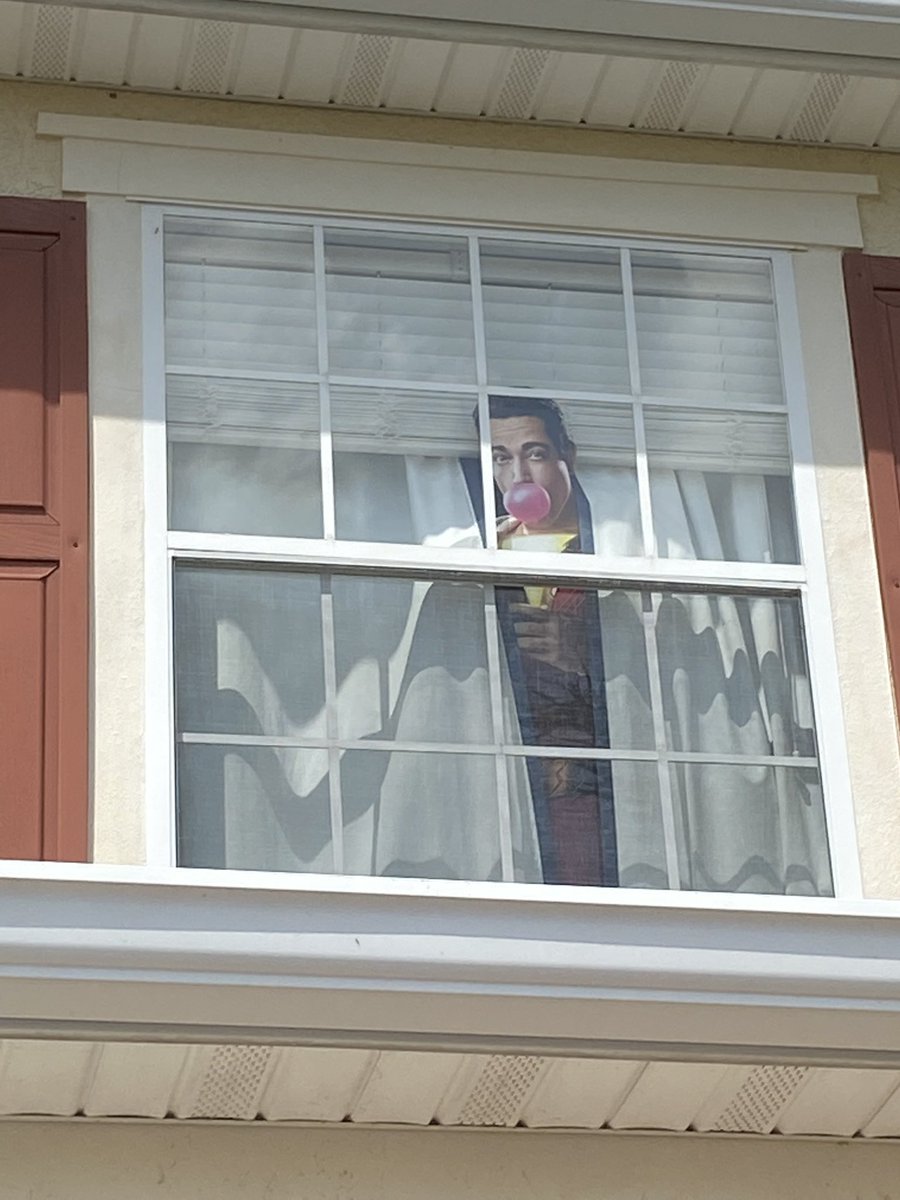